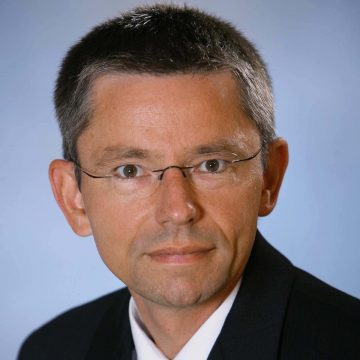 André Kaup received the Dipl.-Ing. and Dr.-Ing. degrees in electrical engineering from RWTH Aachen University, Aachen, Germany, in 1989 and 1995, respectively. He joined Siemens Corporate Technology, Munich, Germany, in 1995, and became the Head of the Mobile Applications and Services Group in 1999. Since 2001, he has been a Full Professor and the Head of the Chair of Multimedia Communications and Signal Processing at Friedrich-Alexander University Erlangen-Nuremberg (FAU), Germany. From 2005 to 2007 he was Vice Speaker of the DFG Collaborative Research Center 603. From 2015 to 2017, he served as the Head of the Department of Electrical Engineering and the Vice Dean of the Faculty of Engineering at FAU. He has authored around 400 journal and conference papers and has over 120 patents granted or pending. Dr. Kaup is a member of the IEEE Multimedia Signal Processing Technical Committee and the Scientific Advisory Board of the German VDE/ITG. He is a Fellow of the IEEE and was elected as a Full Member of the Bavarian Academy of Sciences in 2018. He was a Siemens Inventor of the Year 1998 and received the 1999 ITG Award and several IEEE Best Paper Awards. His group won the Grand Video Compression Challenge from the Picture Coding Symposium 2013. The Faculty of Engineering with FAU and the State of Bavaria honoured him with Teaching Awards, in 2015 and 2020, respectively. He served as an Associate Editor for IEEE Transactions on Circuits and Systems for Video Technology and was a Guest Editor for IEEE Journal of Selected Topics in Signal Processing.

Image and video compression is a key technology in media streaming applications as well as modern communication systems and has gained increasing relevance during the current Corona pandemic as enabling technology for video conferencing systems such as Zoom, WebEx, NetMeeting, and others. In this course we will first shortly review basic image and video compression concepts such as motion compensated hybrid compression, as they have been standardized within JPEG and MPEG. In a second part we will investigate novel graph-based motion compensated wavelet lifting technologies and show how they can be integrated into efficient lossless video compression. We will show that this technology is specifically useful for coding medical hypervolume data. A final third part will focus on recent conditional autoencoder principles for video coding, which make use of neural networks and learning-based compression as a new coding paradigm. We will highlight advantages and compare this technology in terms of its rate distortion performance to current video compression standards.